The Timing of a Door Slam on The Simpsons

I just noticed a great bit of sound direction on The Simpsons. In the famous early episode “Lisa’s Substitute”, Lisa loses her temper at Homer, and screams at him, “You, sir, are a baboon!”:

…and runs upstairs to her room. A few seconds later Bart breaks the tension with a typically great bit of Bart cheek: “Whoa. Somebody was bound to say it one day, I just can’t believe it was her.”: 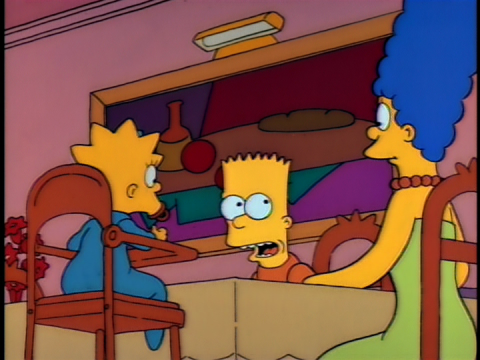 Why would they time the door slam in the middle of Bart’s line? They could have just let her run upstairs and slam her door, then have Bart’s quip cut through the ensuing silence.

Instead, they mingled their moods together. Lisa’s anger sounds out right against Bart’s cheekiness. That is so classic Simpsons. So much of the humor is in the mere coexistence of its characters.

P.S. Here’s a probably short-lived YouTube link to the scene.

You are currently reading The Timing of a Door Slam on The Simpsons at Yash Parghi.